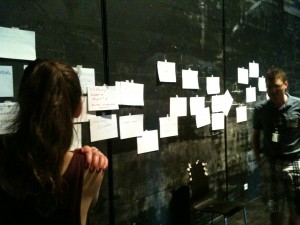 TERRORisms was the name of the last international theatre festival, that took place in Stuttgart for five days, from 24.-28. June in 2015. There, 5 cities of 5 countries were invited by the organization “Union des Théâtres des l’Europe” (U.T.E) to perform their plays of the topic. Within five days Oslo, Tel-Aviv, Belgrade, Stuttgart and Reims showed their plays.

Also the group of the Performing Arts Lovers (YPALs) participated in the festival. On one hand our YPAL group watched all of the plays and joined the artist talk, in which the German journalist Jürgen Berger interviewed the artist directors. On the other hand some members of the YPAL organised workshops by themselves to discuss the topic Terrorisms and the plays. For example Quentin arranged a game to reflect the Norway play “We chew on the bones of time”. Afterwards we met the artist to discuss the play.  In two other workshops we presented the theatre institutions and artists of our countries and exchanged views about it. Hence, a wide knowledge base was created .

Another interesting Workshop was given by Rony, another YPAL member. We had to go around the city and to observe our surrounding, to be aware of our perception towards nature, people and sound. In fact it was a great exercise to create a conscious perception of our surrounding and to pay attention to small, inconspicuous things, talks and people.

We also had to reflect the plays by taking pictures of objects and environment which remind us of the plays.

Overview of all 5 plays: 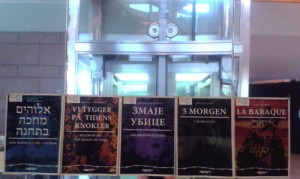 “There is no terrorism in singular form, but a variety of TERRORisms”

Between 2013 and 2015, theatres from Oslo, Stuttgart, Belgrade, Tel Aviv, and Reims dealt with the issue of TERRORisms. They elaborated different points of views and explored different aspects that are likely fundamentally determining our societies.

All through 2013–2015, new texts written by renowned contemporary playwrights from all over Europe gave way to a series of production exchanges among the participating theatres. Two conferences in Oslo and Stuttgart marked the beginning and the end of the project that lead to two publications dealing with the issue of terrorism and its appropriation by artists. Finally, a festival in Stuttgart showcasing these productions took place in the summer of 2015.

E-Book of the scripts: http://www.culturbooks.de/terrorisms/

Website of the Young European Journalists on Perfoming Arts: www.conflict-zones.reviews